The Lost Town of Brooklyn Town

Until 22/07/02 I was of the belief that the Town of Brooklington existed just North East of Woods Point. On 22/07/02 I received an e-mail from a man called Rudi Paoletti who has put me straight an a few points on the old ghost towns in that area. I have left the original story as it was told to me as I found that to be interesting. After all it is by word of mouth how the knowledge of these old towns live on in the memories of those who would keep them alive. Rudi Paoletti has a Web Site of his own which in itself is quite impressive. I have been advised by Rudi that he read my story about Brooklington with interest. However what you state historically some of it is incorrect. First Brooklington is in fact spelt Brooklyn Town. Rudi advises me that he has original 1866 maps and survey, titles, plans etc. He also has the whole history of the town, who ran the hotel, population, etc. Apparently what is described below about the area sounds like the lost town of Wyeton and not Brooklyn Town, which isn't that far away. Apparently Brooklyn Town as little evidence, however Wyeton in what is described below still has much of that, including those darn blackberries. For those wishing the exact position of these towns Rudi's maps have all the locations, as well as many shanty's, hotels & mines in the area. Stander's Creek is also there along with its sister towns, Champion Village and Royal Standard.

There is a story of a lost gold mining town in the hills around Woods Point in the High Country in Victoria. I was told of the lost town by a work colleague some years ago about an old ghost town he once visited in the hills near Woods Point. He is quite familiar with the area in and around Woods Point as his Grandfather was one of the original inhabitants. His Grandfather told him of many things in the area including the lost town of Brooklyn Town. His Grandfather now deceased, is buried there in the cemetery perched high on the side of the hill over looking the splendid little historical town. I visited the grave site and was impressed by its presence. When it is my turn, I would be supremely satisfied to hold command over such an outlook. The below photograph is the view from the cemetery, and was taken in the late afternoon one spring. It is a reasonable journey to get to Woods Point, but once there it is like steeping back in time 50 years. Woods Point is truly an isolated township surrounded entirely by mountains of the Victorian "High Country". Now if you have been to Woods Point and think it is isolated you would be lost for words in describing the isolation of Brooklyn Town. 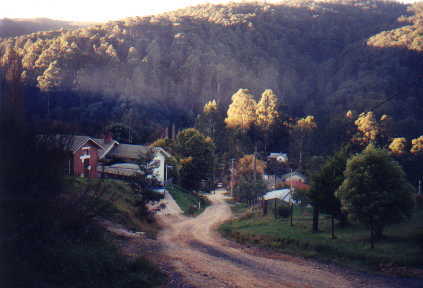 My friend told me of a township in a deep gully where the chimneys of the huts were still intact. He described to me an old 20's or 30's derelict bus type vehicle there, with a pot belly stove inside the cabin area and a tree growing up through the centre of the back of the bus. There were also Black Smith Bellows and anvils. There were steam plants and also the Bank Vault still there.  There are crushing plants with their stampers still intact. He described the place as being about 20 metres from the creek on the sides of the hills. The ruined huts were all placed on terraces which had been cut into the sides of the hill. He said he visited this area about 20 years ago, but it was quite overgrown then and the track leading to the township was extremely difficult to negotiate then. He said he has since attempted to find the entrance to the track but it is now so overgrown that is is almost impossible to find the area where it used to be.

The area is also thick with blackberry bushes, the bane of bush. A brush with one of these ensures pain, itching  and discomfort for hours. So they are well avoided. The reason why I mention the dreaded Blackberry Bush is that Woods Point seems to have more share of this bush than any other area in Victoria. This weed just loves to grow on the sides of hills and in its gullies. I visited Woods Point several times and on one occasion attempted to locate the track which leads into Brooklyn Town. I received rough directions from my colleague and drove to the area where the track should be found.  Well I think I had a snow flakes chance in hell of finding it. The entire area was covered in the dreaded Blackberry bush and the new roads which have been cut have obliterated the old original track leading to the town.

I don't think I would have had much of a chance of getting into the area anyway as his description of the track, would probably require a team of experienced four wheel drivers with chain saws and recovery equipment. The town is about 9 kilometres North East of Woods Point (as the crow flies) and the track is off the Aberfeldy / Walhalla Road. Brooklyn Town is probably built off the Black River, which is a tributary of the Goulbourne River. If you were interested in finding the town I would probably suggest driving in as far as the vehicle could take you and then covering the rest of the journey on foot. But I would ensure I was well prepared, and I would not do it alone. My friend also told me of some lost mines off Stander Creek. This is about 5 to 6 kilometres EEN from Woods Point (as the crow flies).


I have also included some photographs of the old shell petrol station which can be found in Woods Point. It is featured in many off road magazines and also the occasional television program and commercials. The town of Woods Point is rich in gold mining history and is well worth a visit. A four wheel drive is not absolutely necessary but is highly recommended. You would certainly need a four wheel drive in the winter months and chains would be essential. I have been told by locals that the town sometimes gets cut off in the winter. The Hotel is something else. It is like walking back in time once you step into it. The rooms in the Hotel when I was there were very well appointed for a High Country Location. I must add though, that the locals are from another era and were most entertaining. Woods Point is very different.