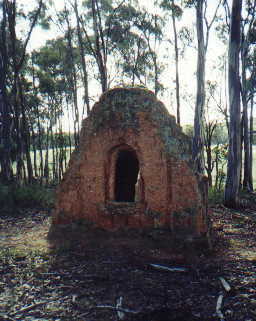 When I examined the structure, there appeared to be blackening on the material on the inside of the structure. "The Oven" is made from roughly made clay bricks, which appear to be kiln dried or perhaps sun baked. It was then made in an arch type fashion, but in a pyramid shape. It was then covered in a layer of clay, both inside and out. "The Oven" appears to be possibly fired to a hard finish. There is a window cavity in one side as can be seen in the photograph. It appears as though it accommodated some type of frame, but there is no trace of that now. On the other side of "The Oven" there is a small door way. "The Oven"  is about 2.5 metres square inside. A tall man could stand upright in the middle.

It is said that for some time, an old Chinese man lived in the oven. I believe that this occurred in the early part of the 1920's. He has since long gone though. There were many chinese diggers in this part of Victoria in those and earlier years. If you choose to visit this site though a 4 x 4 drive would be recommended. A conventional car can get close, but be careful as the track can get very rutted. Also be very careful, as there are numerous mine shafts in the area. most have been plugged, but same are still open. If you do your research you may be able to locate "The Greenock" mine shaft. This mine has a VERY colourful history. But that is another story.