The Lost Golden Reef of Clifton

In 1876 a story emerged of a rich golden reef which lay hidden in the vicinity of two small country towns near Toowoomba called Clifton, Allora and the Goomburra Station. This area lies just to the North of Warwick. Both Clifton and Allora are off the main highway but are well worth a look at.  Goomburra now is little more than a location. It was in 1876 when it was said that two aboriginal brothers "Tommy" and "Harry" were supposed to be heading to Goomburra Station from Clifton Station where they were to help with some cattle mustering, is when the story really starts. In those days many people traveled on foot as did Tommy and Harry do most of their travel. The distance between the two stations was about 50 kilometers, and the only things that Tommy and Harry were carrying at the time were their tomahawks. (Inset Clifton)

A week went by and neither Tommy nor Harry had arrived at Goomburra Station. By this time the station owner was becoming concerned about the brothers safety, but had assumed that the brothers had gone "walkabout".  It must be remembered that in 1876 there were no telephones or radios or electricity. A month had now passed and a settler by the name of Warren was riding around the area looking for stray cattle. Warren had spent considerable time searching through thick bushland when he came across the mortally wounded Tommy.  Tommy lay critically wounded from severe axe wounds.  As Tommy was close to death Warren took the aboriginal lad back to his station and attended to his wounds. His wounds were so severe though that he died about a week later. It was during this final week of Tommy's life that he told Warren of his amazing discovery. (Inset Allora Railway Hotel) 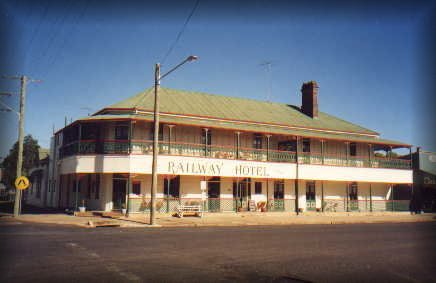 Over the time he was missing, Tommy told Warren that he had crawled from water supply to water supply, living on this water, insects and lizards until he was finally found by Warren. Tommy also told Warren that he and Harry  were about half way between Clifton and Goomburra when they discovered a rocky outcrop in a gully which appeared to be rich in gold. They hit the rock where the gold was visible with one of their tomahawks and obtained a piece of the reef. It was at this point that a fight ensued as to who was the owner of the gold. The quarrel escalated and they started using their tomahawks on each other. Harry was killed in the fight and Tommy was mortally wounded while defending himself.  Warren had no choice but to believe him, as he still had a large portion of gold encrusted reef in his possession when he was found.

As a result of what Tommy had told Warren, the locals searched far and wide, and in every gully that lead into Kings Creek, but the reef was never found. So it was said. It is my understanding that the reef has still not been found and is lying there waiting to be discovered by some lucky individual. I hope that individual is me.