Railtons Tunnel is said to be a government project. It is said that during the depression years a gentleman by the name of Railton needed work and some form of income for his family. At that time the government was issuing incentive payments to individuals who were finding gold outside of the established known gold areas. It was the intention of the government to open up new undiscovered gold fields. It is also said that, Railton not being a stupid man approached the government about receiving a grant to dig a new drive looking for gold. Railton advised the government that he knew of an area which he believed to have very high potential for gold. And so Railton began digging the tunnel. 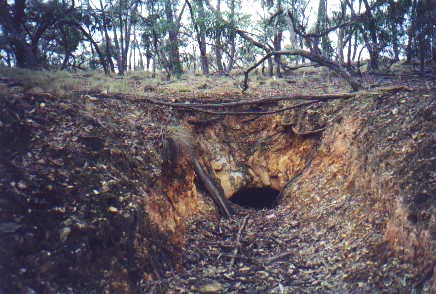 The Government Gold warden would regularly come and inspect Railtons Tunnel have tea with him and discuss how he was going and enquire if Railton had found any gold yet. Railton would always answer that he had not located any gold yet but must surely be nearly upon it. The Gold Warden would then happily return to his office and continue authorisation of the grant to Railton. I was advised, that what the Gold Warden did not know, was that Railton was not looking for gold at all. In fact Railton was only just digging the tunnel to receive the grant. You see Railton had figured out that digging a tunnel to receive a wage was not a bad idea during the depression years. As work was extremely scarce, Railton had come up with the perfect plan to receive money during these tough years. As I said Railton was not a stupid man. 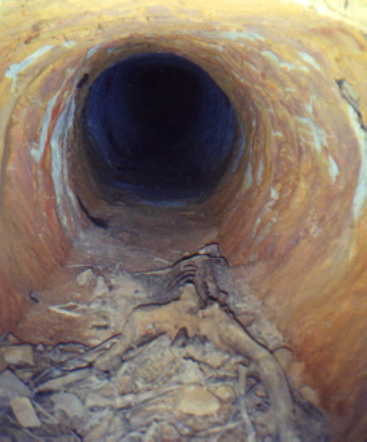 The tunnel runs for about 150 feet straight into the side of a hill. The entrance as can be seen in the photo is now nearly completely covered. I thought it might be interesting to go inside and have a look, as I was assured it was reasonably safe. So I walked up to the tunnel entrance and peered in. It was absolutely jet black inside, so I slowly crawled inside and strained my eyes to see further into the tunnel. I was so intent looking into the tunnel, and also my eyes had not adjusted to the dark at that stage, that I had not notice what lay at my feet. Slowly as my eyes adjusted to the dark I saw a dead body laying just before me. I was kneeling between its legs. It was then I realised that a small person could stand upright in this tunnel and a taller person couldn't. My immediate thought was that someone had been killed and that the body had been dumped in poor old Railton's Tunnel. It wasn't until after the shock had gone that I could see that it was the carcass of a dead Kangaroo lying on its side. You can see from the photo that I may be excused for making this initial error. The lump on my head did eventually go away.

Now getting back to the story, once you crawl inside the tunnel, it is quite large, and as I said a small person can stand upright, but a large person would need to stoop. Railton had cut out little nooks into the walls at intervals where he would leave his tobacco pouch. The actual drive is in nearly pure pipe clay. When I was there, I had a very good look for gold but I would probably say that the overburden and mullock is barren. I was using a Gold Bug, but with the Super Detectors you never know. The tunnel is located near St Arnaud in Victoria.