About 10 to kilometres west of Stuart Mill is a dam called Teddington Reserve. As a result of a chance meeting with an old country gentleman at St Arnaud several years ago, I have travelled to Teddington Reserve many a time. I was sitting in the hotel at St Arnaud one evening after a day of fossicking and exploring, when I began a conversation with a local character. He told me of a place called Teddington Reserve. He told me of two old locals who used to fossick in that area and that they used to get good gold from a particular spot. I was even more impressed when he offered to take me to the exact spot where these old fellows were getting their gold. He said that they had filled an old jar with nuggets from this area. I thought about his offer for about oh probably a microsecond and then accepted. He said to meet him at the Pub the next day at 8 am and he would take me there. Well I am about to tell you the exact spot where these old fellows got their gold.

I actually was staying at the Botanical Hotel, so I did not have far to travel to the meeting spot. Eight am arrived the next day and he was there waiting for me. So off we headed to Teddington Reserve. I must add here that I was quite on edge as the thought of finding some gold that day really got me going. Now I couldn't believe though that someone would actually take a stranger to a secret gold location that they knew of. But, here it was happening to me. About 40 minutes later we arrived at the dam. I must say I was quite impressed with it as there are actually two dams, Teddington Reserve 1 and 2. We continued on past reserves 1 and 2. We then arrived at an amazing old hut, which is known as the old "Fisherman's Hut". Have you ever noticed in the gold fields that everything is "old" something. Anyway this hut is old, but really quaint. We stopped and had a look around. Apparently you can stay in the hut if you like. The cost is free, but it is first in best dressed and it is very basic. But there is a large fireplace inside and an old thunder box  some distance away. 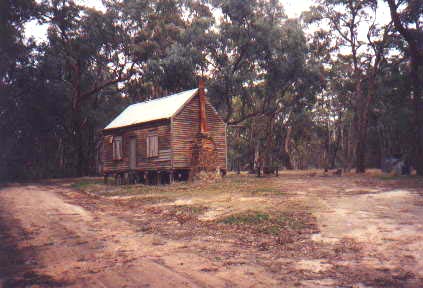 Having looked at the "Old" "Fisherman's Hut" we drove on for a bit more where we veered left down a track which lead to the very head of the dams. I believe the track was named "Blue Gum Road". At that time a four wheel drive could drive down this track, but it has since been blocked by the forestry. It was at this spot the kindly St Arnaud local said we are here. Now I must tell you at this point, that I am blessed with an ability to detect a smell in the air where gold is generally found. I have since been told by geologists that this odour is the arsenides evaporating from the soils. It to me smells like a cross between garlic and golden wattle. I always love it when I get this smell because I know then that I am near the gold. Well I must say that the spot where I was taken absolutely reeked of this smell. Now that got me excited. He then took me over to a culvert where there was a dam plate. He said this was the spot where the old timers got their gold. Well here I was at the spot. Like the dog who caught the car, what do I do now? Do I detect, pan or just explore for a bit. He said he had to get back to town and then left me to my own devices.

I decided to explore first and walked up the creek. It was actually quite rugged with many washouts. I would think it also good snake country. After a short explore, I grabbed my Gold Bug and proceeded to detect in earnest. I must say though, there was very little in the way of rubbish, which made a nice change. Oh yes, there was also even less in the way of gold. So, not being daunted by this, I dug very deep behind the metal dam trap and collected much wash for panning. Feeling now that the gold for sure would be very fine I proceeded to the nearest water where I washed the dirt. NOTHING. Not a colour nor a speck. I'm thinking about now that I have been dudded, so I packed up and headed back into town. After some discussion with a good friend in town I decided that maybe I had not been dudded at all. This friend told me that a friend of his once walked into the head of the lake during drought times and detected a five ounce nugget about 500 metres from where I had been looking. So, well maybe I was not dudded after all. Perhaps I was not looking in the spots where the gold was hiding. Or perhaps the gold saw me coming and ducked off a bit. Well there are two things for sure at Teddington, I found no gold, and the place does really stink of arsenides. And we all know where there are arsenides there is gold. Oh yes, by the way my friend also confirmed the two old fossickers story, that they did have jars of gold filled from around that area. Just the same I don't think they got it all.