Tenterfield is history plus. The area has a close affiliation with Sir Henry Parkes. Tenterfield also has strong claim on Peter Allen who wrote songs such as the "Tenterfield Saddler" and "I Still Call Australia Home". I would only say positive things about Peter Allen in Tenterfield as they do feel very strongly about him there. Peter Allen is the grandson of George Woolnough the Saddler himself. The Old Tenterfield Saddler shop is still there and is still selling saddles and leather goods. It was built in 1860 of hand cut blue granite. There are many buildings in Tenterfield which are old, historical and very beautiful. Take plenty of film. The Information Centre in town is well equipped with information and the advisors there are more than willing to impart their knowledge of the area. I would also recommend a trip to "The Famous Pie Shop" in Rouse Street (02 6736 3556) as they sell the best pies and the atmosphere in the shop is very pleasant. You can actually have a sit down Pie Meal quite inexpensively. It is also early Australian settler decor. Well I am sorry to say that I have found better tasting pies than the "The Famous Pie Shop" in Rouse Street. Fortunately for "The Famous Pie Shop" in Rouse Street, these pies can only be bought at the PARKER Bakery at Rutherglen in Victoria (September 2003). I must say though, that the PARKER PIES are that absolute best pies I have ever tasted, so if you are ever in Rutherglen in Victoria, I would highly recommend that you go to the PARKER Bakery Tel (02) 6032 9605 and buy yourself a pie.

There are several fishing spots around Tenterfield. These include Glenlyon dam near Texas and just off the Mole River. Roads in and around the Mole River are worth a bypass. The area is semi arid Trap Rock country, but it does have some spectacular gorge type views. Pictured below. Other fishing spots include Sawyers Gully Travelling Stock Reserve, Ballandean Reserve, Stock Reserve South of Bolivia Hill and the Deepwater Reserve. 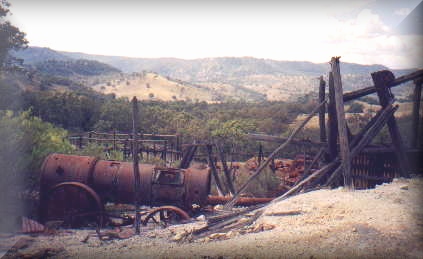 A short distance up the road Northeast of town is Thunderbolts Cave. There is parking on the side of the road and a well worn path leads you up to the cave. It is only a short walk and is interesting when you get there. Boonoo Boonoo National Park (pronounced Boun-noo Bun-noo (but you say it quickly together)) is located further up this road, which is Mt Lindsay Highway. The Highway is bitumen for a short distance, but the majority of it is dirt. Camping is encouraged in the area. There are numerous walks with abundant wildlife. I have not been to them, but I am told that the Boonoo Boonoo Falls are quite spectacular and well worth the walk. There are also other spectacular waterfalls in the area too.

West of Tenterfield is the  Mt Mackenzie drive. I would recommend this drive to all who stay at Tenterfield.  It is a drive that can be done in any vehicle but there are reasonable portions which are unsealed. On this drive you will see numerous granite landmarks such as, The Doctors Nose, Draining Rock, Weeping Rock, Wallangarra Ranges and Mt MacKenzie Lookout. There are toilet facilities here and it is also a great spot for a picnic. The views here are also pretty special. But then the views on the drive are pretty special too. Just out of town on a small detour on this drive is Ghost Gully. It is just a small gully featuring some rather sever land degradation, but it does offer the photographer some pretty special photo opportunities. I think it is worth a detour. I would also recommend a visit to the Railway Station Museum in Railway Avenue (02 6736 2223).

East of Tenterfield is Drake. I will not mention much of Drake, but if you do your research of this area you will find that you will have more than you can handle for a full three or four week holiday.