TOOLOOM About 1884 Kenny McLean, a local resident and a German mate of his, followed a reef down about 25 feet, lost the lead and abandoned the show. At the end of the year in 1890, John PAYNE and his son Jack were prospecting right through DRAKE, following the gullies and creeks,. They arrived at TOOLOOM just before Christmas time, and after purchasing their supplies and yarning with some local inhabitants, they decided to have a look at the Kenny McLean show. Young Jack descended the shaft, and at at the bottom found a couple of feet of water had collected. This had caused the bottom of the shaft to sweat and wash the old workings. After a short time the son ascended and displayed to his father a hat full of gold specimens. After claiming the shaft as the "Rise and Shine", within a week they had secured 105 ounces of Gold. After 6 weeks they had secured 600 ounces of Gold. That's about $250,000 in today's standards, not bad for just six weeks work. Mrs PAYNE used to own the Old TOOLOOM Station but I believe that it may have passed into new hands. Recently I drove past the station and the area now is no longer cattle flats, but has been converted into a eucalyptus forest and it has totally transformed the landscape. The last time I spoke with Mrs PAYNE she advised me that she was trying to sell the entire property and it would appear that may have happened. Unfortunately, it would appear that who ever planted the trees, they have also planted them on the old town site of Tooloom. In TOOLOOM at Dunns Gully the "Lady Bowen" nugget was recovered and it weighed 110 ozs. Pictured here is the Tooloom Falls. There is actually a nice camping spot above the falls. To the right out of the photograph is Haystack, Beehive Mountain or South Obelisk Mountain. I'm not sure exactly which is the correct name. 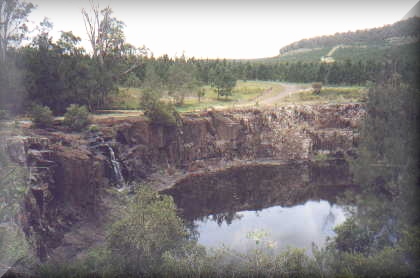 In the Tooloom area is a private camping location called LANIKAI. It is about 55 km west of Bonalbo and is at the lower end of the Tooloom Gold fields. Evidence of the gold seekers who worked the Pretty Gully gold field from about 1859 can still be seen along Pretty Gully Creek and the gullies running into it. At Pretty Gully the basalt covered lead is on a mountain beside the Clarence River and extends along the Northern side of the gully for 6.4 km. Gold can still be found with a pan, sieve and shovel if you know where to look. I am sure there are some specks of gold just hiding there waiting for you to find them. Gold in a vial has a magic all of its own. At Tooloom in Dunns Gully the "Lady Bowen" nugget was recovered and it weighed 110 ozs. The fossicker will need a small (12 inch diam.) 1/8 inch sieve, a plastic gold pan, a pick and a shovel, an eye dropper and an empty film canister.  The cost is $5.00 per person per day (1999).

PRETTY GULLY Rainforest is a small drive up the road from Lanikai. The gully walk has Fig Trees, Bangalow Palms, Hoop Pines old gums and is aptly named. Paddy's Flat is just nearby and is located along the river crossing. It is a grassed and tree studded flat. The area is wonderful for fishing, swimming, Kayaking, camping (which is permitted) and fossicking. I have been told you can find gold, topaz and garnets in this area, but I do not know how many you would find. Fossils (Bryozoa) can be found in Emu Creek which is also not far away. The rock is black with white worm looking patterns throughout the rock. It cabochons beautifully.

On 5/11/1859 surveyor ROBERTS made a valuable discovery at Pretty Gully. Gold was found a plenty. Within a very short time the field filled with hundreds of hopeful diggers. Three hundred men were working Pretty Gully. It is interesting to note that the Gully was also home to a Native Cat. These cats incidentally were really native cats and not feral domestic cats of the present day. Mining finished about 1900, except for some Chinese who continued after the Europeans had left.

The drive from Tabulam to Urbanville on the back road up through Tooloom is in places quite picturesque.