When the gold is light and then night becomes day,

To find your way,

That you will not rue, when you find that hollow,

There will be a map for you to follow,

The tasks of the Quest, will abound,

Then go your ways with things to be found,

And things to be done

Ensure that you all have loads of fun

For the Treasure Quest Trophy may be your pay

Which, was followed by this; 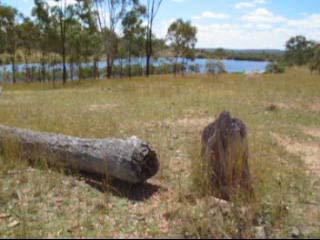 Yep, that is how the Treasure Quest 2004 commenced. On the Friday night the leader from each team went to the Coordinators Site, which just so happened to be my site and they had to see me and then they were issued with a scroll with burnt edges, with the above riddle on it and it was bound with a small red ribbon. It was sort of a bit like a treasure map. Well it was supposed to look like that anyway.

Now my site just so happened to be Site 1. and I was actually telling them to come to Site 1. at dawn the next day and then would be given a clue. You guessed it!!! The clue was in an envelope. There were 5 sealed envelopes, each with a Sapphire name on the front. Now for example the yellow sapphire envelope may have had the above photograph enclosed. The Team Leader then had to go back to his team, open the envelope and work out where that stump and log was. One can tell that there the log is probably pretty close to the lake. One would also know where the log and stump was if they looked at the back of the photograph as it had a pretty direct hint on the back.

Once the teams found the hollow stump, they would then find a map and a set of instructions in a sealed plastic sleeve. Their tasks were then clear for the day.

Off the 5 teams went in their separate ways. For a while I stayed at my Camp Site, but after about an hour or so, I decided to head off and see how everyone was going. It appeared initially that everyone had found their maps and sets of instructions, but alas it was not so. Apparently, the owner of the 1,700 acres had given some information that was easily misinterpreted and as a result the Bribie Island Club could not find the Plateau, where their stump was hiding.

Anyway after getting some wise directions to the plateau, the Bribie Island Team found their stump in no time flat and they were off and racing. There they were on the spot with high-level decisions being made, like "Lets go back to camp and sort out who's doing what". 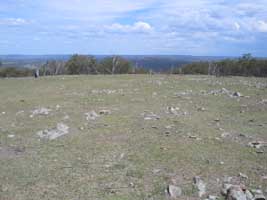 It was then that I decided to drive around the odd 7 or 8 kilometres of ring road around the perimeter of the property and see what the others were up to. It was a big property with a labyrinth of tracks, which was a maze to anyone, including myself. Fortunately, everyone I came across had smiles on their faces, well mostly anyway.

I felt a sense of pain, or pity or grimace for those who only had 4 members in their team, as they had to work just so much harder to achieve the same result. But against all of the odds they achieved and in many ways, their reduced numbers caused them to be more inventive in their approach. For example, one of the small teams, presented fish all right. Yellow Belly Fingerlings!!!!!! Yes, they presented 14 guppy sized Yellow Belly fish. And, as I did not specify the size (silly me) I had to award them full points for each fish presented. I had to disqualify the ones floating belly up though.

Anyway back to the day's events. There was sweat, feathers and fortunately not too much blood and no tears too. Mind you there was the odd grizzle about something about being "too hard". I think they must have been talking about the rocks. For I would never make a Treasure Quest or a Gem Safari Mystery Tour too hard, would I folks! He he!!!!

The main thing though was that there were 5 separate Gem Clubs from in and around Brisbane all working together to beat each other at the same lot of tasks. The clubs consisted of The Australian Facetors Guild - Moreton Bay Branch, The Mitchelton & Districts Gem Club Inc, North Brisbane Lapidary Club Inc, Mt. Gravatt Lapidary Society, and The Bribie Island Fossicking and Gem Club.

Prior to the event I did meet at the various clubs where possible and I did send information via e-mails and make the various telephone calls, and I did tell everyone to be prepared for anything. But, I never ever expected a club to bring a full sized inflatable zodiac boat with an outboard motor. Yes the S.S. Sand Fly or was that the S.S. Bush Fly was launched onto Lake Glendon for a full assault of the water front, with the mission to catch as many fish as possible before 4:00 pm that day. They should have taken a tip from The AFG team with their 14 guppies. 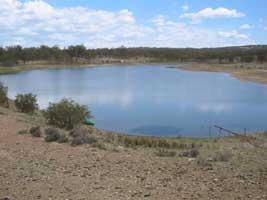 Anyway 4:00 pm came around and all teams turned up back at their sites right on 4:00 pm. They did that, as they knew if they did not, they would have attracted penalty points. And, no one wanted that, as the points were too hard to get in the first place.

At 4:00 pm Len and myself wandered around the camping grounds judging the various presentations. Well-done Mitchelton, for catching 15 full sized fish. By far the best fish tally. And, without a boat too. Bribie Island was one of the most inventive for feathers as they had presented 2 of their pet cockatiels for feathers. I had to disqualify the cockatiels as the feathers were still alive and they did not originate from Glendon. Sorry about that guys.

Mt. Gravatt Club also did very well with their persistence and their tally of 8 fish and 28 yabbies. Which I must add, was not too bad. Full points, for the 28 red claw yabbies? I still don't think they believed me that all yabbies go red when they are cooked. The red Claw quest was actually a red herring, as there are NO Red Claw crays on the property. Sorry about that guys.

North Brisbane club did very well on the gold count as they had found the most gold by far. Unfortunately I had to drop the gram thing, as it actually got down to the number of specks of gold found. I guess a bit more time would have helped. Lucky they brought the kid (who dug and panned most of that gold). 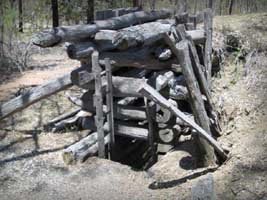 Between 4:00 pm and about 5:30 pm I was busy judging and tallying scores and checking and re-checking the scores, to make sure I got it right. In the end the scores we as follows;

At 7:00 all teams formed a large circle and I do mean large. The diameter of the campfire circle was about 30 odd feet and that was the first circle. Yes, there were two tiers of circles. In all I counted about 45 in attendance. Firstly the desserts were presented and all tucked into the desserts and enjoyed them thoroughly. Then it was onto the official part of the weekend of the event the announcement of the winner and a bit of a rundown of the points and then the presentation of the Trophy. And the Winner Is!! Well you know that as you can see the above scores. Yes, and the clear winner was;

The Bribie Island Fossicking and Gem Club with 1715 points.

Each Club then gave a small presentation of the history of Glendon or a novelty presentation and Classical Rendition of AB PATTERSON poems. Very well done Geoff. Again.

And here is the Trophy, what all of the fuss was about; 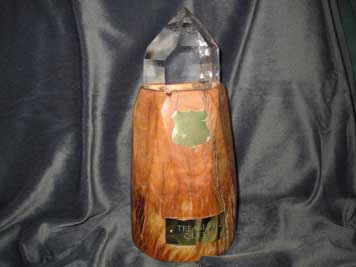 Next year it will be hotly defended by this year's winner.

I have been told by a couple of the attending clubs, that they expect next year, there will be numerous clubs knocking on the Treasure Quest 2005 door, to be included in the proceedings for that year.

I think that I already have a location eye-balled for next year's event, that I am sure will please everyone.

I would say that at the end of the Treasure Quest 2004 event on the Saturday night, everyone without exception had a really fantastic time. I know Lenny was suffering with sore ribs from laughing so much. I know that because he told me so. Both Mark and Sandy the proprietors of Glendon camping Grounds also had a great time as they were included in the game. They also came to the campfire and enjoyed the entertainment.

I can tell you that from the positive response of the Treasure Quest 2004, there will be many more to come.