I would suggest that most people drive through Warwick without giving it much of a second thought. The township is, as are most country towns, quite historical. There are many beautiful historical old buildings which can make some beautiful photographs. I think the Police Station and the Court House are quite special. I find Warwick interesting, but I find its surroundings more interesting.

As I am into fossicking I have found Talgai to be an interesting location. Talgai is actually quite famous for the find of the fossilised Talgai Skull. Now the spots I am talking of are not sign posted and in the main they are not generally open to the public. But having said that, I have found that most farmers will allow you onto their properties once you have introduced yourself to them, told them what you are on about, what you would like to see and generally have indicated to them you are a decent person. Usually they are happy to know that you have done some research and know a little of their area. But this part is entirely up to you. Now Talgai has many old Gold Mines on many properties. Some I have visited, some I have not, but the ones I have were really old and interesting. I have one pictured, but this is just one of many which litter the area. There are many open shafts in the area and caution must be observed. Oh yes, this particular spot is actually infested with trap-door spiders and I do mean infested. Their nests area about 30 centimetres apart. I was actually bitten by a Golden Orb shortly after taking this photograph and I can tell you it was painful. Don't ever let your guard down in the bush. 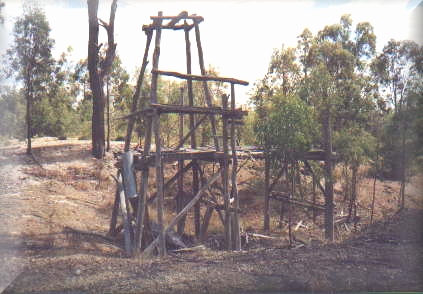 Not far from Talgai if the small township of Pratten. Pratten itself is not overly inspiring but just a little North west of Pratten is Mount Gammie and Mount Gammie North. These locations are worth a visit, but you will definitely need a four wheel drive. Don't even try to attempt to go up these mountains in anything but a four wheel drive. At the top the area is absolutely peppered with mine shafts and old mining equipment. I have been told nuggets can be found in the area, but check the leases first. Leyburn is just up the road and is also a gold mining area. At Thanes Creek there is a fossicking area called Glendon Camping Ground. I understand gold fossicking can be done in this area. (The phone number used to be 07 4667 4756) There was actually quite a lot of gold won from the Warwick area and I am sure there is still a lot hiding there. If you are looking for rainforests this is not the area for you.

East of Warwick is the Freestone area. I have explored this area and found once the road narrows and starts to head into the hills this is where it starts to become scenic. The road really narrows towards the end but a four wheel drive will afford you much more versatility. If you drive as far as you can walking will also reward you with a pretty bush environment. But don't forget watch out for snakes, especially in the warmer months. In this Eastern region the Yangan and  Rockbrae area are also interesting. There are a number of restored old buildings at Yangan well worth a photo. I have included a photo of the Yangan School of Arts, but the Masonic Lodge and Post Office are also worth a photo. As with the Freestone Creek area, the Yangan and Rockbrae areas have dead end gorge country too. If you like exploring it is worth a drive to the end of Hell Hole Creek and Emu Creek gorges. These spots are actually just on the other side of "The Head", and in fact if you drive a little South to Killarney you can drive up into "The Head". Just Southeast of Warwick is the Cherrabah Homestead Resort (07 4667 9177), which is a Farmstay / Retreat / Conference styled resort. The Cherrabah Homestead Resort has a web site www.cherrabah.com.au which explains in detail what facilities are available. I have not been there myself, but it does look like a lot of fun. 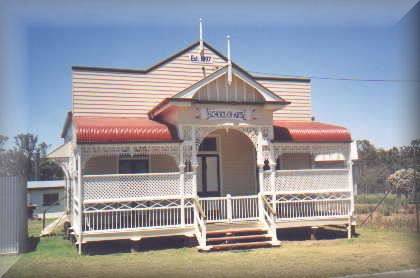 To the West of Warwick is Leslie Dam or Lake Leslie. This is a resort type youth camp. The actual dam itself is quite large and allows for canoeing and fishing. There are quite lovely picnic and barbecue areas at the dam wall. You can also drive a way around the dam on the South-eastern side and there are some access spots. These would be very good for a quite fish. Now along Glen Road and off Ford Road, there is a Rhodonite mine. I have been told that the Rhodonite from this mine is of good quality.